Enormous amounts of water from quasars, organic stellar factories, and DNA self-assembling on wet graphene buckyballs, is a recipe for life even at vast cosmic time and size scales, beyond our detection methods. 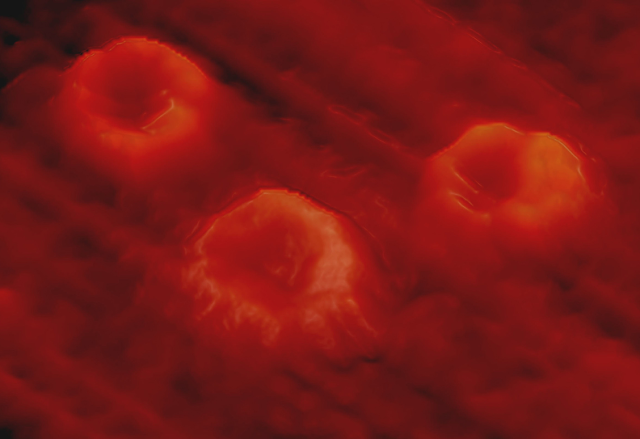 Hydrogen everywhere in the Universe mixes with oxygen made from stars, and forms enormous amounts of WATER in the Universe. The orion nebulae produces water equal to 60 earth oceans everyday. A RICH and ACTIVE ORGANIC astrochemistry takes place BETWEEN THE STARS. Abundant complex carbonaceous molecules made of more then 100 C atoms are found.  Quasars produce water vapor hundreds of light years in size. NASA says water is pervasive throughout the universe even at the very earliest known times. Stars produce enormous amounts of complex organic matter, and eject it into the interstellar space medium.

Plasma in zero gravity outer space forms string-like filaments and helical charged dust structures resembling DNA strands. Life might well be common but unrecognized in star filaments and ever larger scaled filaments of the ISM, galactic corona, galaxy clusters, and even superclusters.  Dark matter plasma life theories involve living cells and neurons.  Ribosomes are the functional equivalents to carbon nanotubes with metallic fullerenes inside, that initiates the sudden formation of complex organics.  The common carbon star rapidly manufactures huge amounts of complex organics and expels them, analogous to Ribosomes making copies of genetic material and expelling complex organics into the cytoplasm. Microtubules model black hole physics as electron tunneling carbon nanotube rolled buckysheets. This includes all tubular arrays such as basal bodies, flagella, chromosomes, centrioles. Electron tunneling occurs across Gap Junctions between microtubules in each of two adjacent neurons. The cytoskeleton includes neurons and is made of microtubules. Carbon nanotubes are an analogue to the conditions that quantum water displays having superconducting properties passing through living systems such as ion channels in cell membranes. Stars are connected to the center nucleus of the galaxy, just as ribosomes are with the nucleus that traps light as chemical energy.  Is there a distinction between what we might believe is living? Based on carbon molecular life and water we know only from earth?  Superclusters form thin flat walls and sheets of filaments connect galaxies together, much like cells whose main density lies in the plasma membrane walls enclosing cytoplasm. Stars and Living Cells both form by association with methanol. Methanol is common in star forming regions, and particularly in nearby dark black globules. Over 1,000 trillion individual cells comprise the human body, that is outnumbered 10 to 1 bacterial to animal cell in symbiosis. The observable known universe contains about 1 trillion individual galaxies, or merely 1/1000 galaxies to human body cells.


Everything learned about the Universe has come from electromagnetic phenomena.  Earth's ecosystem likely formed in a common galactic way from outer space organics of contamination, because Earth's water came from outer space.  living ecosystems are collectively functioning in nature.  Here I present shocking evidence of scientific facts, for a better interpretation, and for someone to find or further develop, what is to become the new emerging missing biocosmology to replace Einstein's relativity. Should not society be sick of hearing about the cost to search for stupid dark matter? Earth is believed to be no longer flat and 4.5 billion years old, but the big-bang universe is only 14.5 billion years old ?? Briefly suppose that galactic black holes could be ecosystems where cyanobacteria capture all light at their never seen only inferred black hole centers.  Black hole temperatures are believed near absolute zero, which is an adaptable temperature for cyanobacteria to mutate into huge dense collective swarms, capturing photons replicating dying and surrounding interiors of non-existent black holes of an actual living nucleus.

CYANOBACTERIA easily flourish simply by capturing light.  They are by far the most common bacteria known to form under practically any environment, and organize much like common galaxy types along sheets and filaments, transcending huge and small scale sizes.  Most all cyanobacteria species live colonially inside fractal branching filamentous trichomes composed of hundreds up to thousands of cells.  This is the same number or amount of galaxies that comprise a galaxy cluster.  Motile photomovement moves them everywhere to optimal lighting conditions, where they flourish being concealed by gas and nutrient dust inside mere theoretically believed black holes. They could be responsible for trapping light in black holes, moving by propulsion towards the light source by slime jets, and intake carbon dioxide CO2 for photosynthesis, which is common around stars and nebulae.  The POLAR JETS of cyanobacteria are like Protostar jets, having the same composition mostly WATER and a mesh of polymers studded with PLASMA IONS. The propulsive force is created by slime jets absorbing incoming material mostly water from outside the cell.  Cyanobacteria form natural fractal filamentous assemblages of colonies at known interfaces, and function by collective organization. Collective bacterial behavior and multicellular animal cell activity requires structured biofilm ecosystems of many living kinds of bacteria on an attached surface like a flattened galaxy disk. The solar system could be surrounded by a large BIOSPHERE of frozen and living organisms attached floating on dust grains of rock that wander throughout the galaxy.  In reality our solar system sits within the galactic disk of our galaxy. Hua-bai Li and Henning studied 6 huge molecular clouds in nearby M33 galaxy, and proved that magnetic fields of galaxies orient align nebulae clouds along spiral arms. Andromeda is aligned with M33 and the milky way, where a biosphere or biomass would interact throughout the Universe within the zone of avoidance.  Saturn's moon Enceladus is believed to contain a liquid salt water ocean, and within the plumes organic compounds were detected. Steady jets of water vapor and ice found on the rings of Saturn should be interpreted to imply living bacterial processes exist.  The many concentric colors and patterns on the rings around Saturn could suggest the presence of bacteria. Abundant oxygen around Enceladus is strong evidence for photosynthesis. Discredit what they say about how the oxygen got there, and assume life is on Saturn's moon.

PROTOSTARS MOVE BY WATER JETS THAT IRRIGATE THE UNIVERSE AS SPRINKLERS 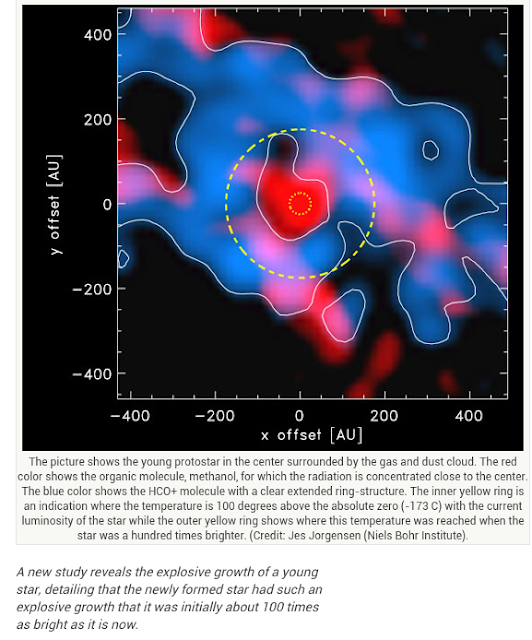 Cells have INTELLIGENCE, which Buehler says is a fractal property. The CENTROSPHERE is the brain of the cell, that projects the EYES in the form of a pair of CENTRIOLES that detect pulsating near infrared signals. By organizing innumerable signals every part of the cell's motion is controlled by perceiving its surroundings. NERVES correspond to the radial array of microtubules connecting the centrosphere unbranchingly with the cellular musculature contained in the cortex.  Microtubules model as rolled carbon buckysheets that are superconductors of electricity. Electron tunneling inside the microtubule nanotube explains black hole physics.

Mitochondria are constantly morphing shapes to form a fractal filamentary web like dynamic structure throughout the entire cell shows Yaffe.

the Cell Nucleus at the center stores light as chemical energy for the entire cell, as does the black hole for a galaxy center. Cold atoms spiral around carbon nanotubes like in an atomic black hole or galaxy. The nuclear envelope completely encloses the nucleus, separating the interior viscous fluid of genetic material from the surrounding cytoplasm, and serving as a barrier to everything. A Galaxy is analogous to an entire living cell with varying numbers of nuclei. The Arcella Amoeba has two nuclei and is donut shaped. Most cells have a single nucleus, some eukaryotic cell types have no nucleus, and others have many nuclei. Polynucleated cells contain multiple nuclei, which includes most protozoa, amoeba, and some fungi and parasites. Human skeletal muscle myocyte cells become polynucleated during development, arranging nuclei to allow maximal intracellular space for myofibrils. In mammalian cells the average diameter of the nucleus occupies about 10% of the total cell volume. The black hole center of every galaxy has the same mass per volume ratio as the nucleus of different cell types. Double Nucleus galaxies are COMMON and no longer believed rare. Graham and Spitler say galaxy formation and evolution models are wrong and will change from single nucleus only beliefs.  Discard all those big-bang gravity formation models of galaxies. Our neighbor Andromeda is a double nucleus galaxy that is normal in the universe.

Filamentary motions of microrganisms by jets

Stars move like filamentary microrganisms in nearby star cluster.  The star cluster is young and has not settled down say the scientists. Movement of individual protostars are not in the least controlled by gravitational forces, and water jets explain the reason for strange filamentary plasma motions.


Dwarf Galaxy of Milky Way and Filamentary Rat Cell :
Stars all orbit like bees surrounding a bee hive in dwarf galaxies. These peculiar orbits require 90-99% dark matter for missing gravity observations. We only can observe nearby galaxies having dwarf galaxies because they contain as little as a few thousand stars. Dwarfs do not have elliptical shapes like the milky way, but are often irregular shaped filamentary emissions, much like rat cells or other types of cells.

The Rat Cell Dwarf Galaxy I Zw 18 is surrounded by filamentary nebular emissions instead of stars in an extended gas halo. 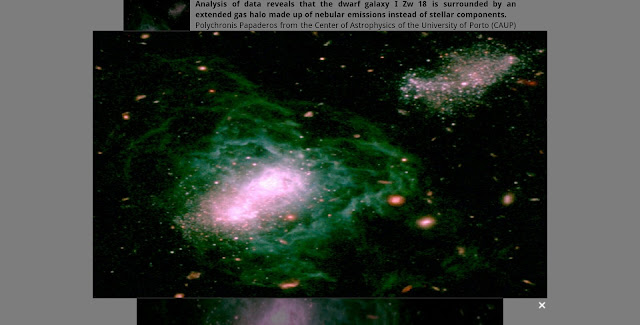 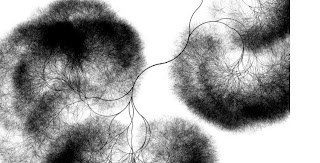 Living Filaments of Matter
Brain Neurons resemble the large-scale filamentary structure of the cosmic web, and have dendrites shaped like spiral arms of stellar filaments orbiting the galactic nucleus at the center of the galaxy enclosed by a plasma nuclear membrane. Double Helix Nebulae 80 LY long and 300 LY away from inferred black hole center of the milky way is produced by a highly ordered extremely strong magnetic field of our galaxy, that is twisting torsional wave propagations out. Morris says "Nobody has ever seen anything like that before in the cosmic realm." It looks like a larger scaled fractal plasma sized DNA double helix filamentary structure that is associated with the center of the galaxy or nuclear membrane of DNA of a living cell.

Halton Arp showed that quasars are not distant early universe objects, but are connected together with visible filaments to the larger mother host galaxy. Protostars in quasars are known to eject water jets for hundreds of light years. Water jets are commonly associated with living cell processes.