A sudden phase change largely of helium gas into superfluid helium 3 occurs near 2 degrees kelvin inside massive protostellar cores, under strong magnetic fields and pressures. This is the brief one thousand year precursor stage for star birth.

New 3D Molecular Cloud Map Startles Astronomers by Revealing Different Interpretations on Why and How Stars Form:
I
Over 500 known "Protostellar cores" are in a precursor protostar stage. Cores are located in extremely dense and cold ~20 degree kelvin dense filamentary regions inside molecular clouds. Protostellar cores were found ranging from 1 to thousands of solar masses. Sarah Ragan writes "there is an underlying population of protostars similar to what is seen in these nearby molecular clouds, and another population of cores in even earlier stages." "Stars form deeply embedded in cold, dense molecular clouds. There is ten times more mass in the host clouds then already in the protostar cores." 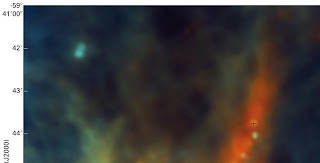 Sarah Ragan has a webpage. Sarah Ragan writes "Tiny nearby Barnard 68 is only a potential two protostar region, but it is condensing from a drawn-out filament, that is heated by external radiation from the direction aligned with the central plane of our milky way galaxy." "CO observations show that B68 is part of a chain of dark globules in both space and velocity, which may indicate it was once part of a filament which dispersed." Barnard 68 is only 500 light years away and 1/2 light years across, but contains extremely dense and cold filament regions where about two protostars will form. A sudden phase change from helium gas to liquid helium in filamentary regions near 2 degrees kelvin, would explain all phenomena by protostars. A hot gaseous envelope would suddenly emerge and  surround the liquid helium core, and a bilayer shields it where it slowly evaporates into helium gas.  A new emerging astrochemistry based cosmology of superfluids and dusty plasma galaxies, describes these exotic phase changes of hydrogen, helium, oxygen, nitrogen. Helium gas turns to liquid at the coldest temperature for any atom. Liquid oxygen filaments likely circulate around the poles of emerging protostars and galaxies. Evidence can be found in my research story here.