Magnetic field lines from phony black holes produce plasma jets we observe on earth. A spinning center region produces jets along its spin axis.
A "magneto-spin alignment mechanism" causes magnetized disks and jets to align with the spin near the center, and farther away to reorient with the outer disk. Stanford University team McKinney, Tchekhovskoy, and Blandford showed in these computer simulations that magnetic field lines form spirals aligned with the axis of rotation of a phony black hole. Birkeland currents are responsible in outer space.  If the magnetic field becomes strong enough, the accretion disk can align with the black hole's rotation axis. They propose "material pulled into the center region causes a stronger buildup of magnetic fields that ultimately controls the spin of the accretion disk, and the direction of the jets."
Videos of the "Magneto-spin alignment mechanism" by the Stanford University team McKinney, Tchekhovskoy, and Blandford : 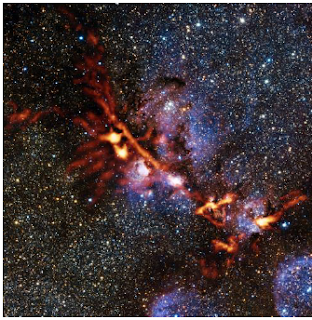