The first rogue planet discovered by infrared telescope is only 100 light years away, and lacks a parent star.  Scientists believe it might be a brown dwarf or "failed star" that lacks fusion, blurring the distinction between planets and stars. They believe that many more rogue planets exist and can be found. If so, freely wandering rogue planets very likely proliferate in the interstellar medium of galaxies. Intelligent life can evolve on a freely wandering roaming rogue planet without a star, because liquid metals like magnesium oxide are in a phase change or superstate where a strong magnetic field can shelter the planet, much like our sun protects earth from deadly radiation with its magnetic field. Alien surface crawlers might thrive where liquid nutrients rise and fill lakes suppling their drinking needs. An actual living super-earth free roaming rogue planet sized object could evolve, primarily composed of superstate liquids, and supporting smaller lifeforms inside and on its surface.
It seems foolish to presume that life must come into existence and evolve on a non-living planet. Symbiotic activity is necessary for a complex life form to exist, with innumerable smaller living things inside and upon it. Just as there are plants and animals, and many smaller cells composing a larger organism, so too would life forms more readily evolve, perhaps like symbiotic parasites on an entire living planet. Supercritical liquid metals besides magnesium oxide, ooze inside super-earth planets. Common rocky silicate minerals become liquids under high temperature and pressure, including quartz, silica or SiO2, and perovskite or magnesium silicate. About 200 or 1/4 of over 800 alien exoplanets discovered so far are super-earths. Unimaginably new thinking has become necessary to understand super-earth planets. Different temperature and pressure conditions, and amounts of metallic elements, would lead to a rich astrochemistry for super-earth planets that can support extremely diverse types of life. Silicon based life should thrive in many super-earth conditions, far better than on Venus. Phase changes of matter are fractal boundaries, endpoints or cutoffs to fractal organization. Blood crystals analog the coastline on earth, and the earth is often referred to as a "living planet."

The largest living organism on earth is not the whale, but a honey mustard fungus monster growing in Oregon, that is 1,500 acres in size, and 3 feet deep beneath the surface. The only way to detect this huge earth life form is by seeing huge honey mushrooms growing. Such a life form could conceivably take over the entire surface of a planet, which evolves into a living planet by symbiosis. 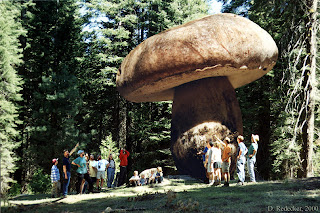