The pigtail molecular cloud is the most clear, detailed, and largest DNA like double helix molecular cloud discovered. It is near our galaxy's center where gases become very dense. Matsumura and Oka at Keiko University believe that a magnetic tube formed between the two clouds, which captures the gas that becomes twisted and squeezed by frictional contact. The magnetic tube is perpendicular to the milky ways galactic disc between the two clouds. The clouds move along the main two elliptical orbits around the galactic nucleus. 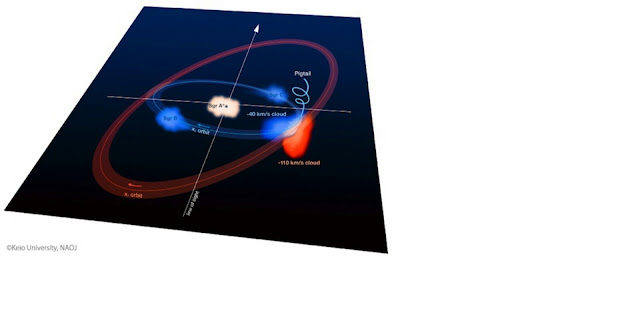 The paper: "Discovery of the Pigtail Molecular Cloud"
Overwhelming evidence grows that living processes shape galaxies.  The diffuse interstellar bands (DIBs) are hundreds of unidentified molecules that exist between the stars. They are believed to contain organic PAC's, which are known to be excreted as waste products by metabolism. Scientists say they form in outer space and caused life to emerge on earth. The PAC's could be trillions of years old and the logical theory is that life first arose on earth from outer space contamination from waste. The fact that PAC's are stable in outer space doesn't require any thinking for a theory on how they form in interstellar space. You'll be much better off realizing that earth is indeed a parasitic planet full of waste, and that you can do better than the Universe with the right kind of thinking.
Living Galaxy Cell Theory
Living filamentary plasma structures in the Universe