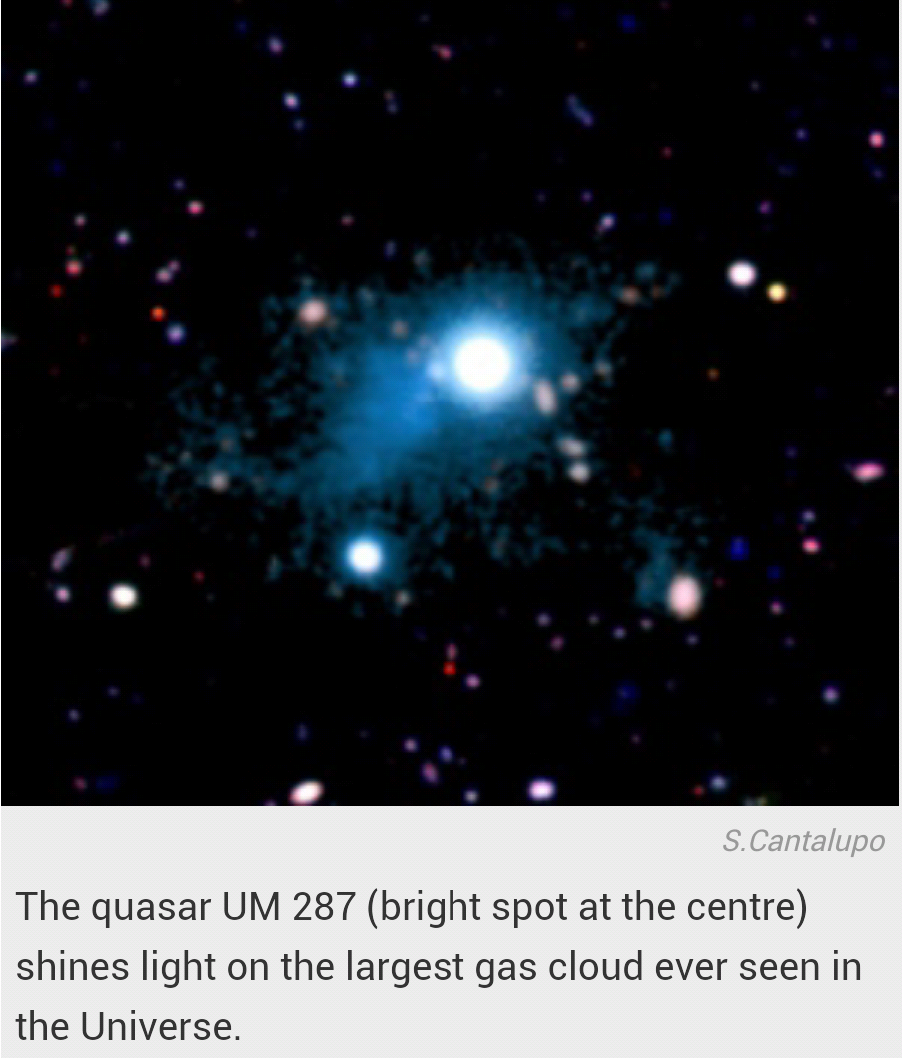 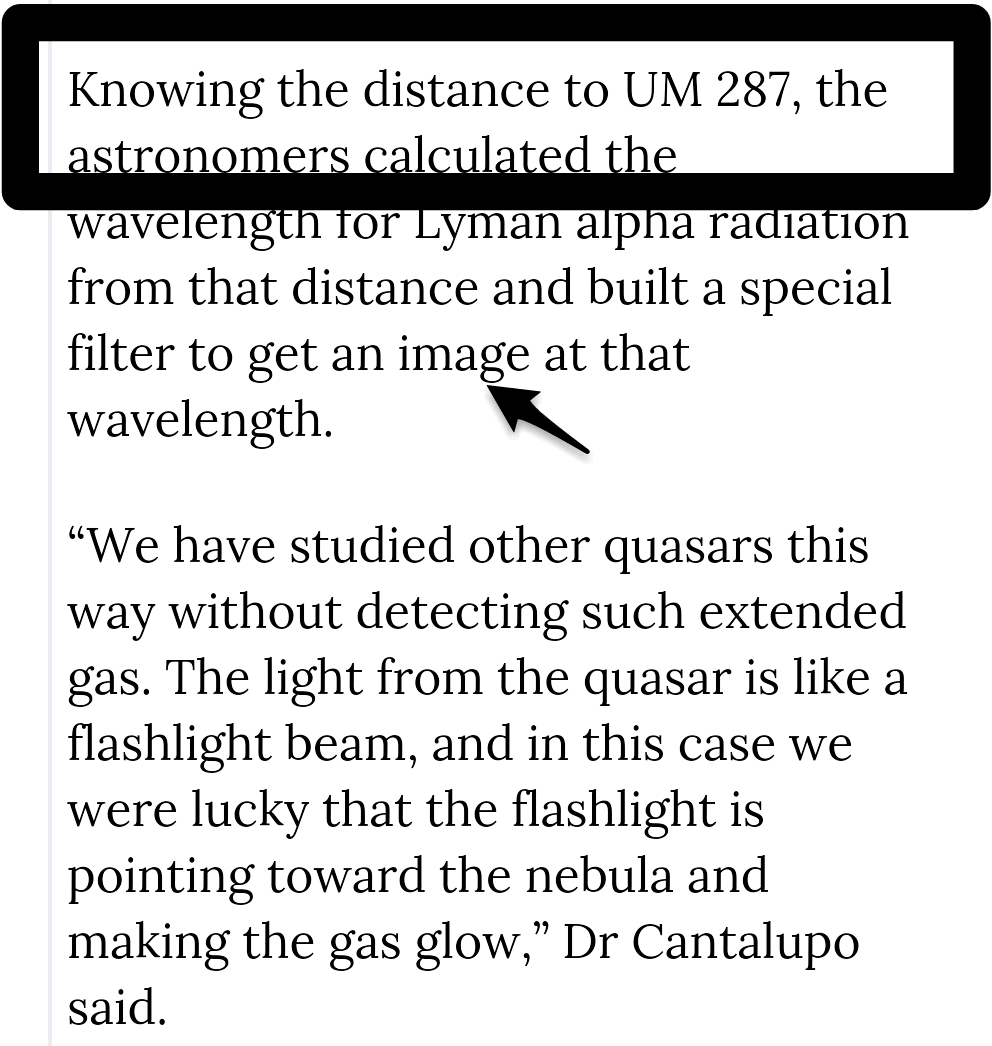 The cloud's size was "linear projected" to be 460 kiloparsecs, or about 2 million light years across, because the illuminated gas cloud is near quasar UM 287, which is believed to be 10 billion light years away from earth. This requires the cloud to be 10 times more massive than predicted to be so luminous. This amounts to over exaggerated speculation seeing undiscernably unclear cosmic web filaments for the first time. 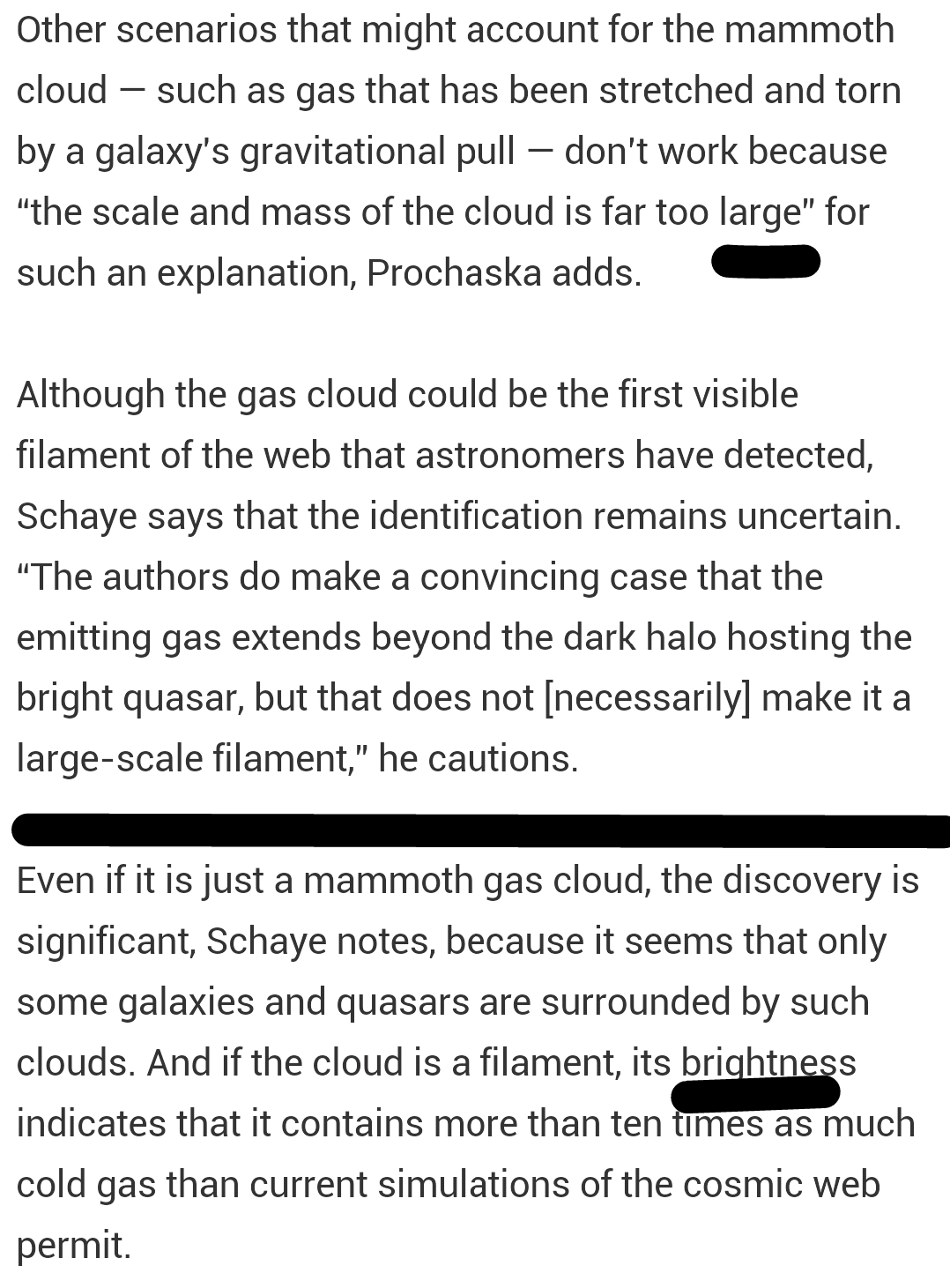 The gas cloud is illuminated by the nearby quasar UM 287.  According to Halton Arp, leaders in plasma cosmology, and the Electric Universe Thunderbolts, quasars are not really so distant. All the mysteries are explained if a common nearby intergalactic gas cloud is not really the largest found, nor mysteriously bright, nor require ten times more missing gas if it's a filament of the cosmic web. 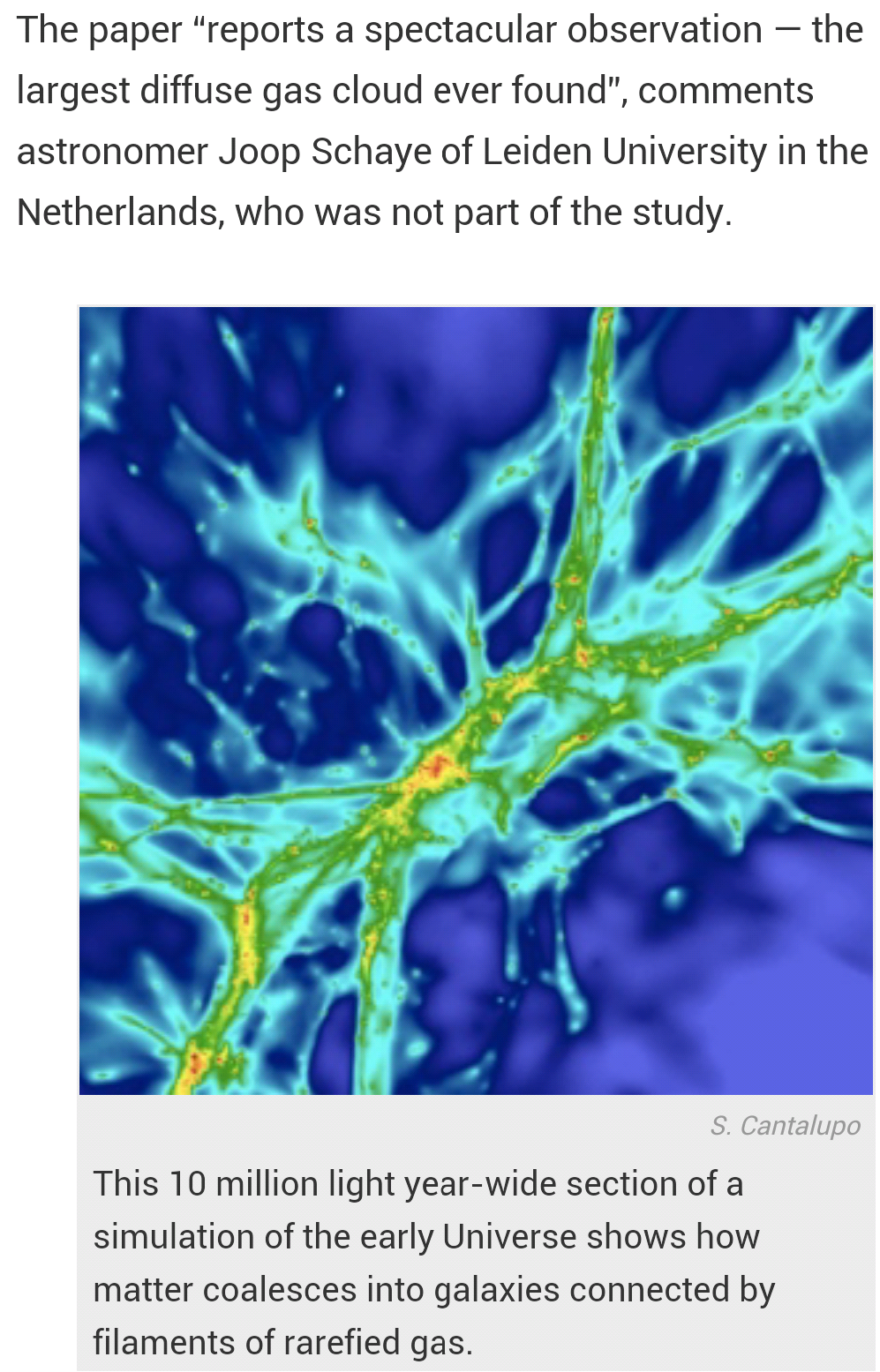 Quasars are point-like energy sources, similar to nearly perfect shaped spheroidal stars and globular clusters. Ancient globular clusters comprised of old stars were discovered to have hopped around several or more galaxies. Halton Arp said that quasars are ejected from their host galaxy. Dwarf spheroidal galaxies may be closely related to globular clusters. The structure's viewing alignment and jet orientation plays an important factor in what kind of cosmic structure that we see. 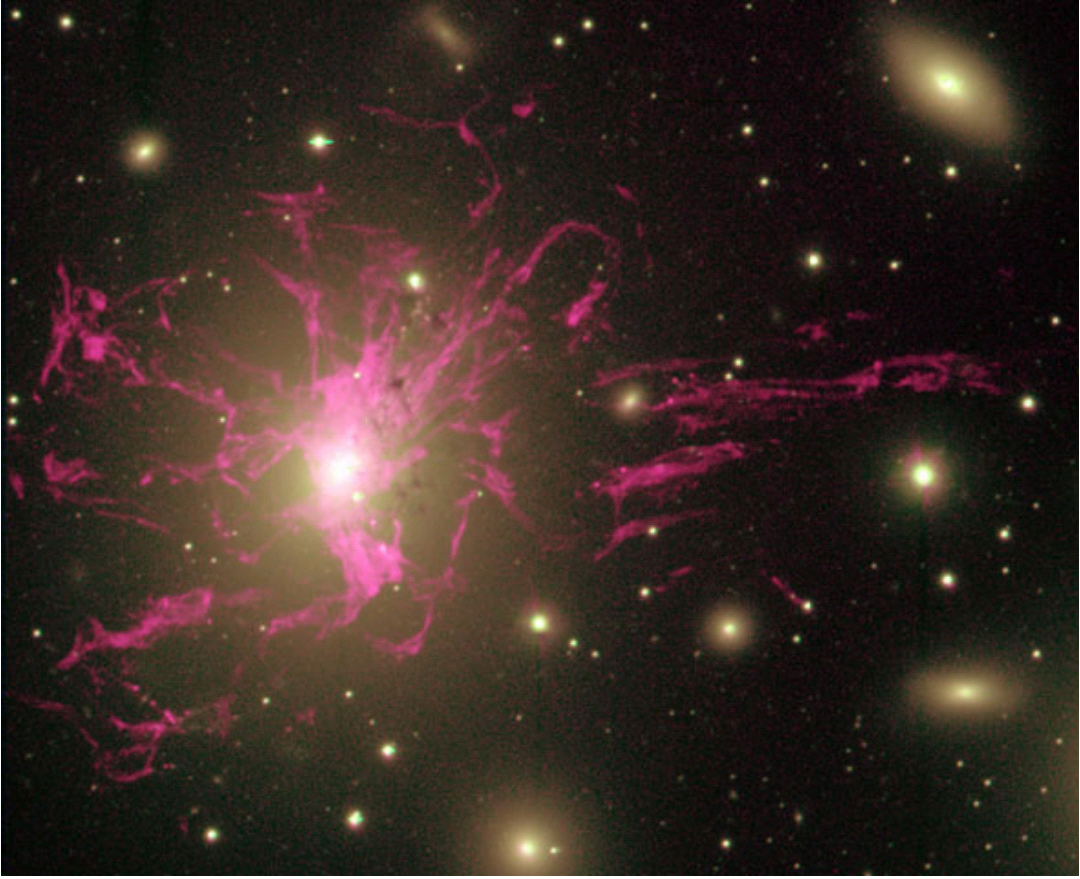 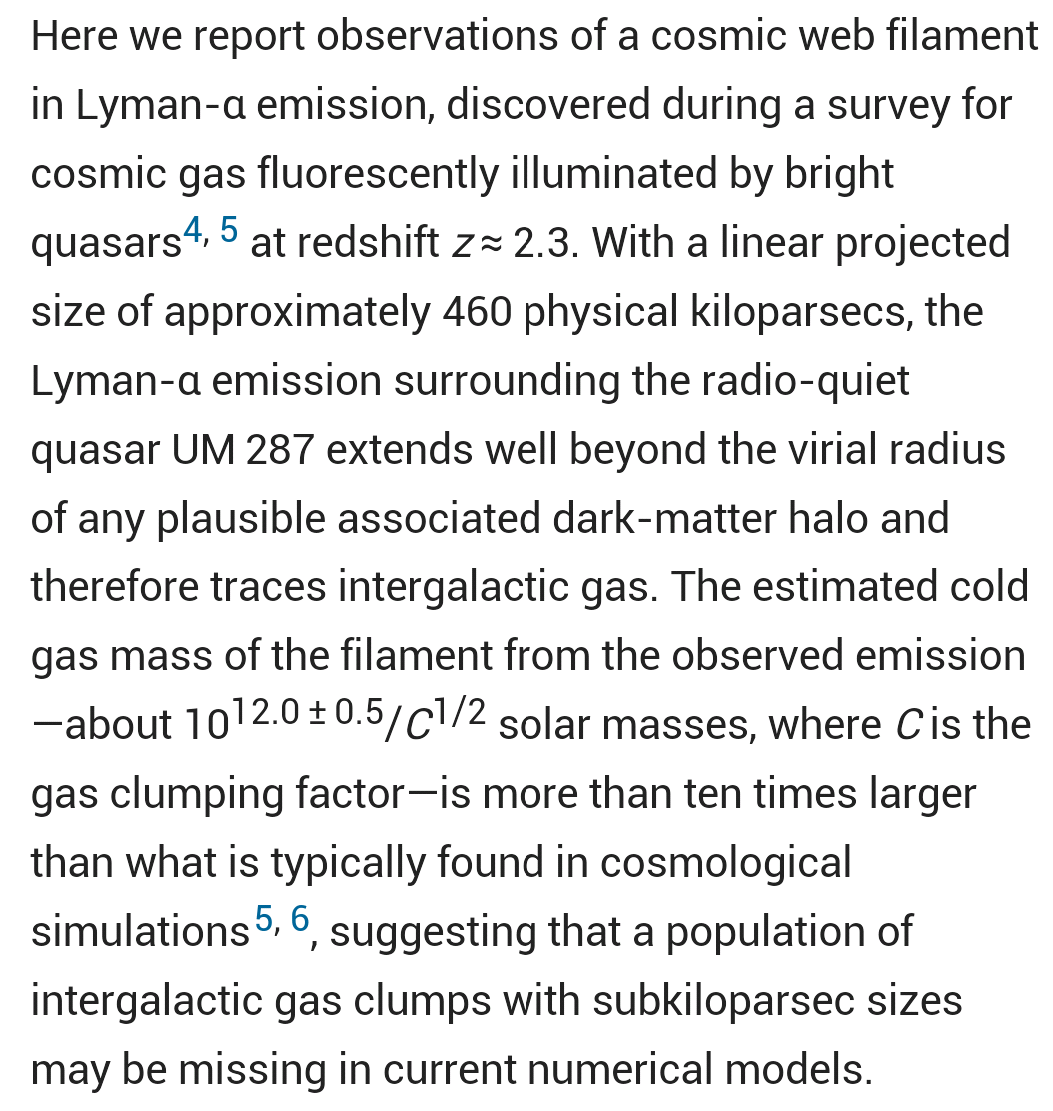 Detection of Intergalactic Gas Clouds Around M31 and M33: 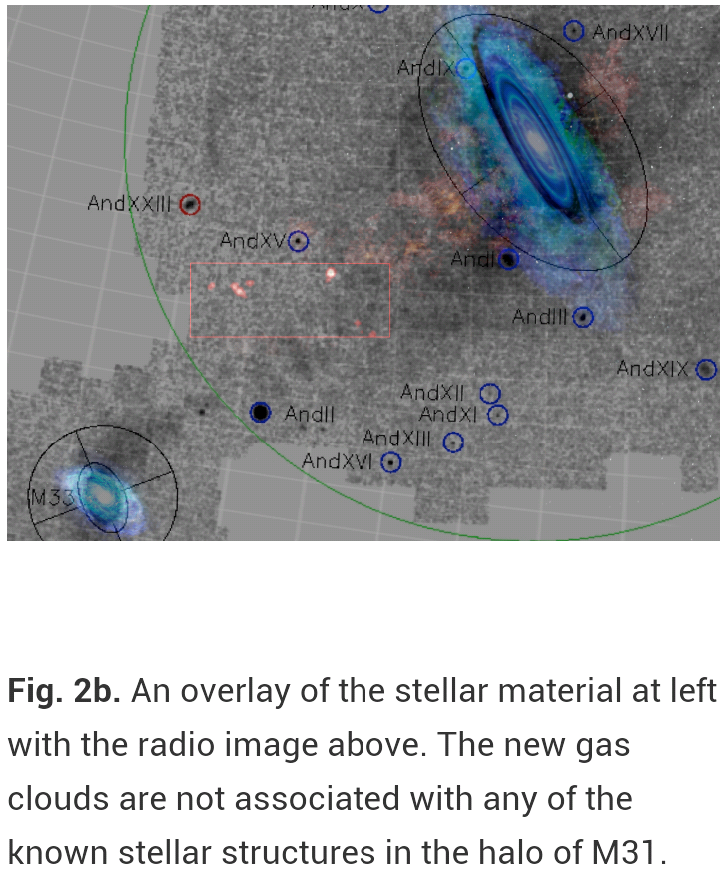 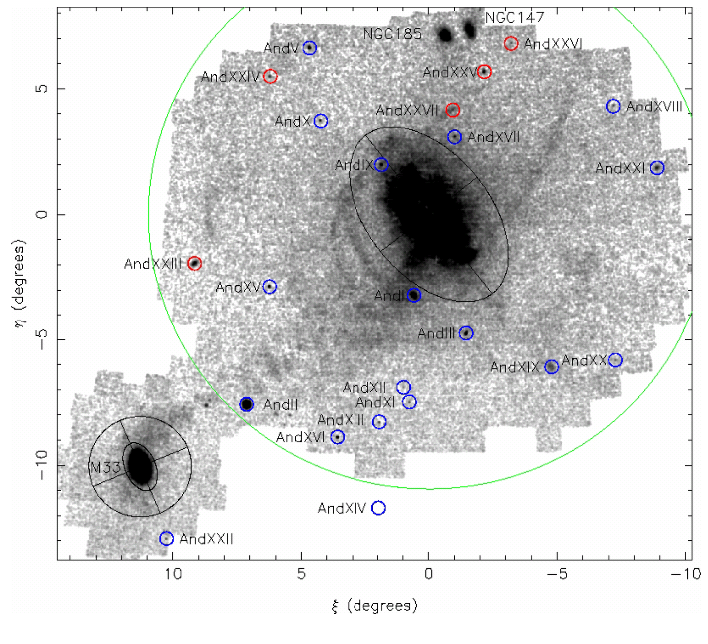 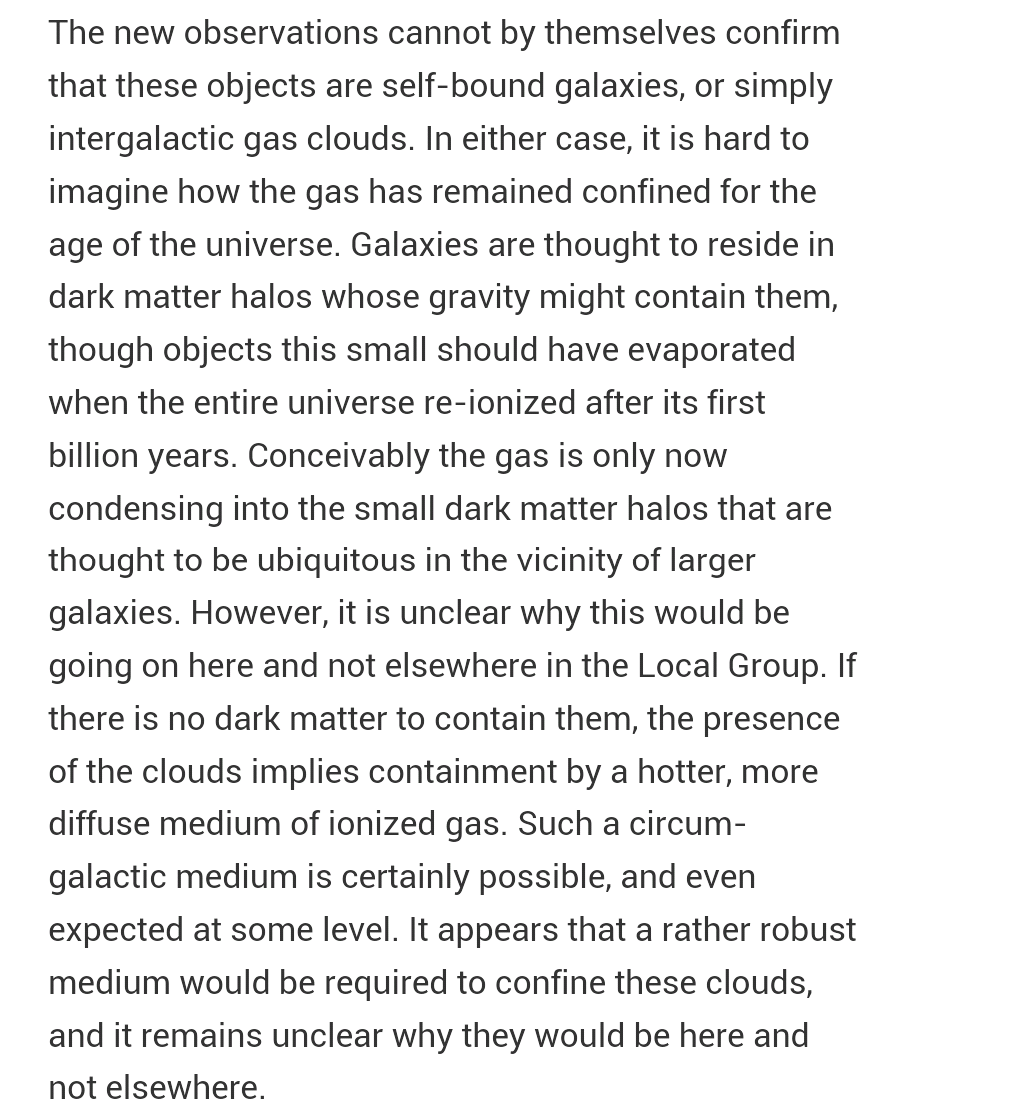 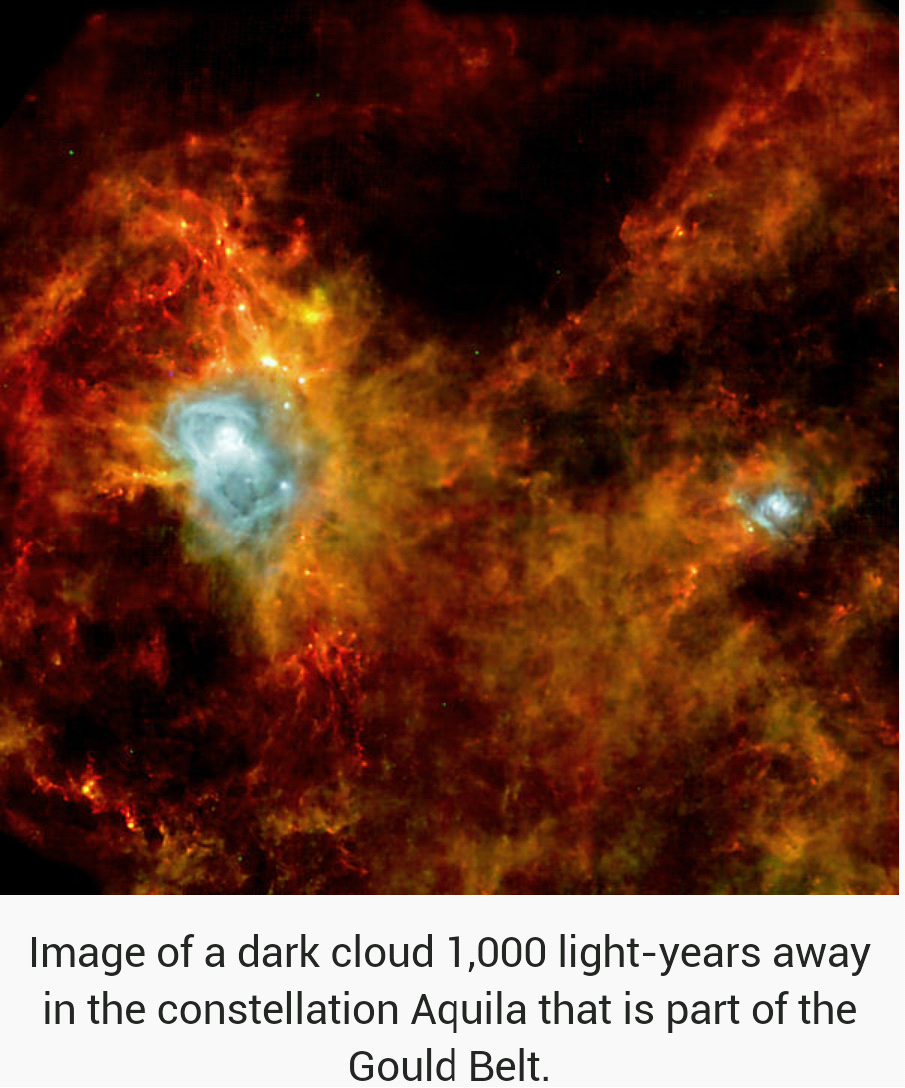 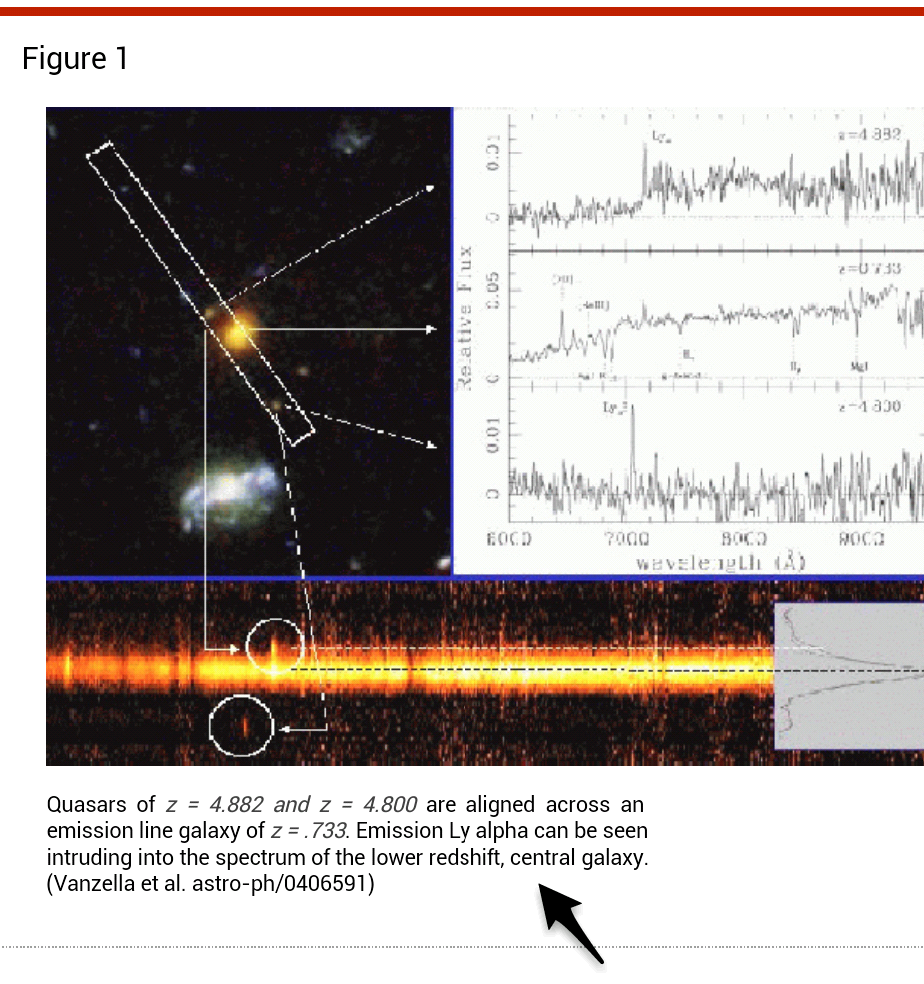 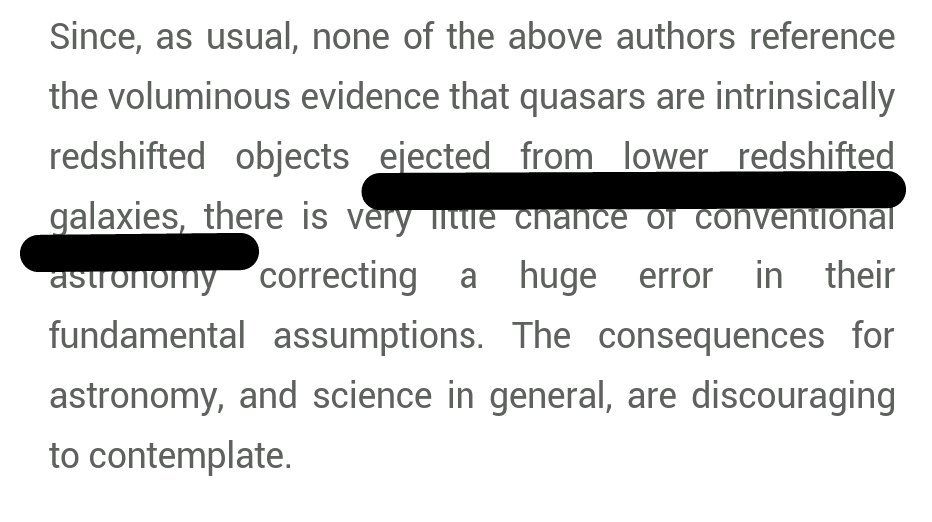 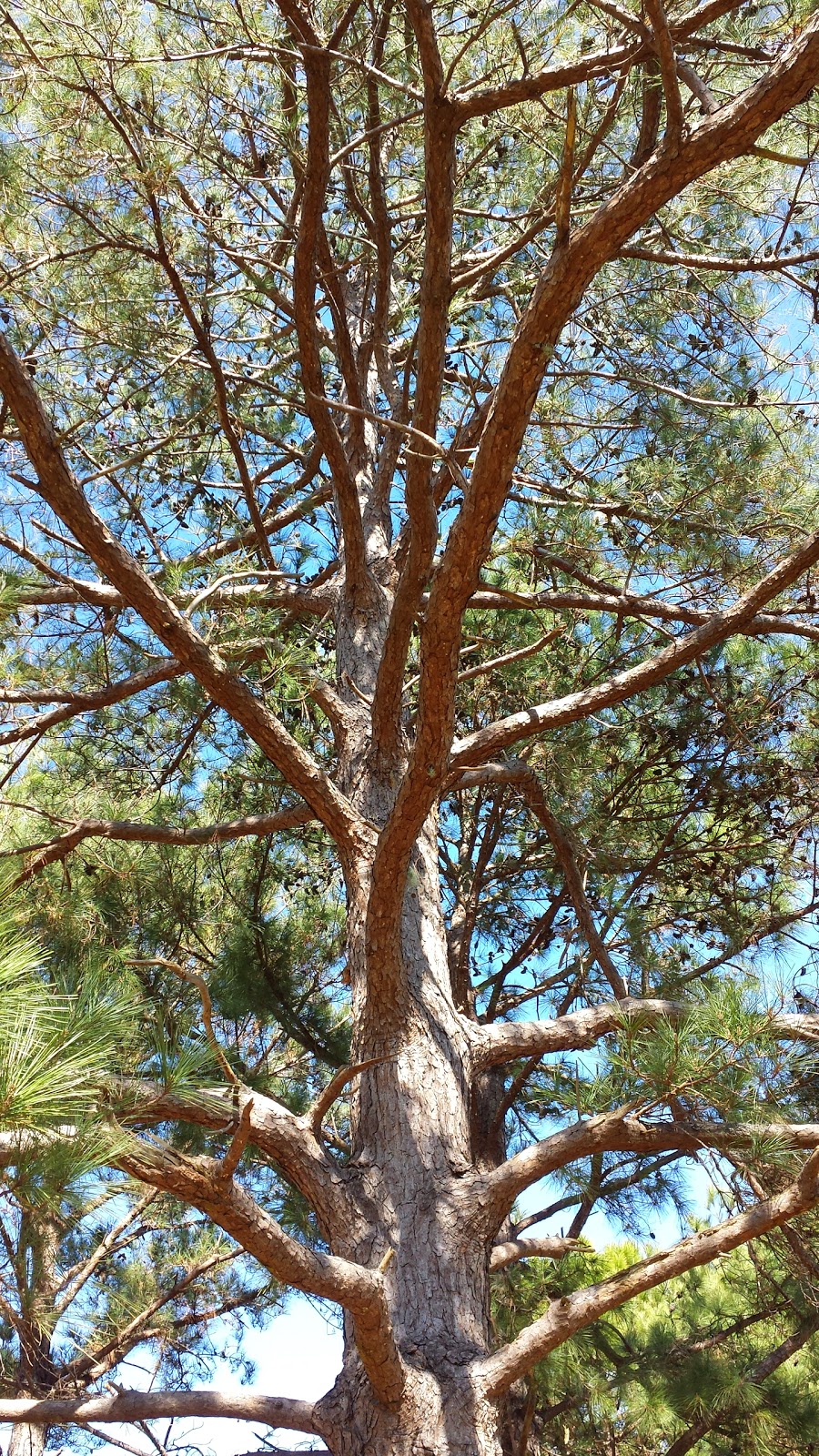 This is a tree branch aligned nearly horizontally with the ground. A blue colored lake is in the background. Cosmic filaments align galaxies into thin vast fractal structural patterns.