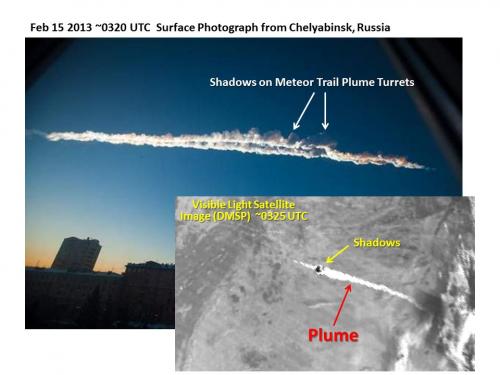 Russian Meteor Explosion and Asteroid 2012 DA14 Near Encounter Breaks Sets New Records Within 24 Hours Apart. NASA says they are not related events because they cannot explain it using their own gravity theories, and want to reduce panic. This story explains how Asteroid 2012 DA14 and the Russian meteor are astronomical related events happening together in an extremely brief time span. Why it's not just a coincidence like they say... 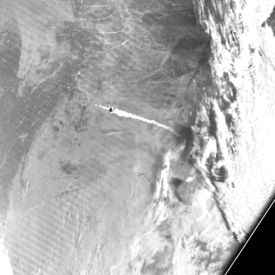 On Feb 15 2013, a space satellite photographs the meteor 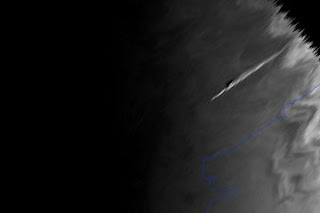 People in Russia take photos of the meteor everywhere on Feb 15, 2013 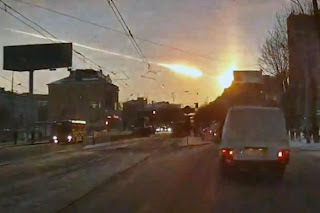 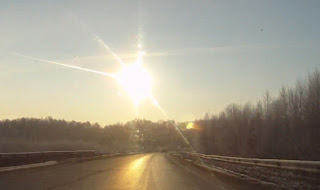 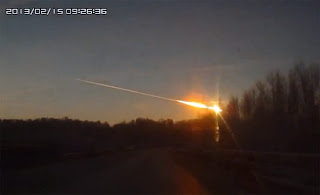 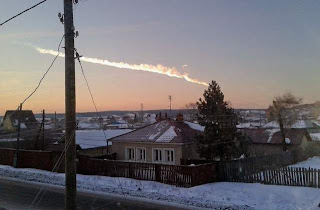 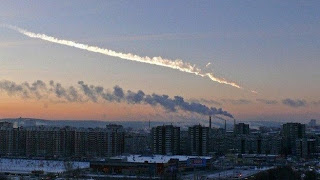 One of many fragments of the Russian meteor lands in a frozen lake, becoming a meteorite displaying black colors in the ice. It could be carbonaceous material from a carbonaceous chondrite meteorite, or the mineral magnetite, found in all iron nickel meteorites?

Scientists have collected meteorite samples up to 1 cm size and are analyzing it. Divers could not find a larger piece. Citizens are looking for pieces of the meteorite in many places. 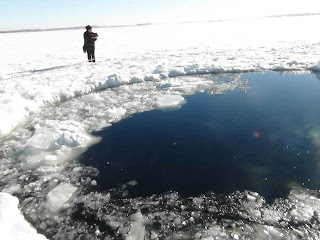 
Russian meteorite fragments found in a lake near Chebarkul have been studied by Viktor Grohovsky of the Urals Federal University. "The meteorite is an ordinary chondrite, a stony meteorite about 10% iron" says Grohovsky. 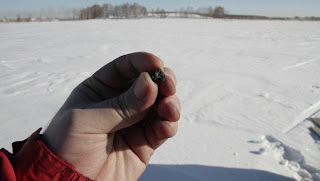 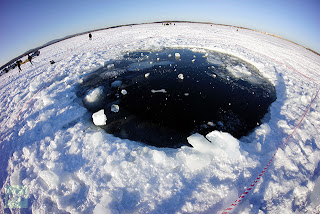 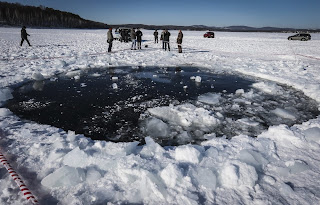 53 pieces of the meteorite were collected to study


People reported there was a terrible smell of sulfur in the air. It was the sulfite burning in the atmosphere from the Russian meteor. 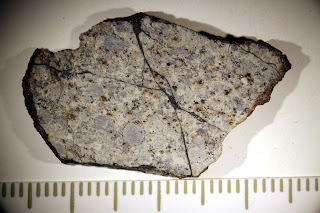 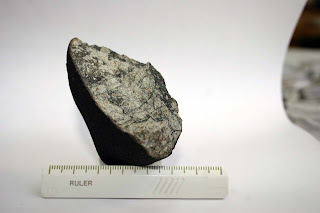 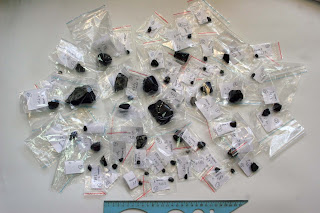 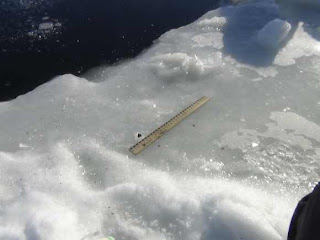 Asteroid 2012 DA14 is a S-type asteroid mostly of magnesium silicate composition and iron. Only 17% of all asteroids are S-type having a stony composition similar to a variety of stony meteorites, consisting of magnesium silicates and iron. 87% of all meteorites are ordinary chondrites that vary in percentage of iron and metals. Ordinary chondrites like these samples are usually fragments reaching the ground that broke off from a larger asteroid, in this case from asteroid 2012 DA14. The compositions are both similar.

There is a group of stony meteorites called carbonaceous chondrites consisting largely of hydrated magnesium-iron silicate, magnetite, and magnesium sulfate. This groundmass encloses chondrules of olivine.

NASA said "the trajectory of the Russian meteor was significantly different than the trajectory of the asteroid 2012 DA14, making it a completely unrelated object." They had opposite traveling north to south trajectories, and not the same trajectory, to be related events. The Interplanetary Magnetic Field could be responsible for diverting asteroid fragments, since the strengths and effects of cosmic magnetic fields keeps increasing beyond what is currently believed at NASA. The sun's magnetic field lines have recently been shown to reinforce and align with the magnetic field lines of earth, involving magnetic reconnection and space portals around earth's magnetosphere. A near encounter with the interplanetary magnetic field by the asteroid 2012 DA14, could break smaller pieces apart, and deflect the trajectory of their orbits around the sun. Two orbits can be separated by a time anomaly angle, but have the same trajectory. A recent very near encounter with the interplanetary magnetic field of the smaller mass asteroid fragment, could deflect and change trajectory, so to possibly strike earth. The Russian meteor broke apart into fragments over Urals, and scattered into fragments streaking across three regions. The meteorite that landed in the lake was moving at a low trajectory about 30 km/s and weighed about 10 tons before entering earth's atmosphere. The larger asteroid passed by earth about 24 hours later, and is the biggest object to ever come so close to earth. These two events are very likely related.

The trajectory of the Russian meteor made it appear to arrive from the sun and approach earth. These asteroids suddenly appear out from nowhere from the direction of the sun and cannot be seen or predicted. Magnetic reconnection between the sun and earth connect together the magnetic field lines of both objects, and these lines of force cause magnetic anomalies when a passing object with mass comes nearby. Magnetic field lines will change the trajectory of a deflected object to travel in opposite directions. Scientists wish not to discuss but rather to dismiss everything as a coincidence to be the experts in authority. 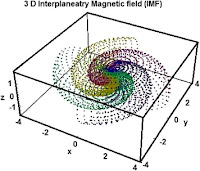 It's not just a 1 in 10 billion cosmic coincidence that asteroid DA14 approached earth, and brought with it fragments that became fireballs seen over Russia and the San Francisco bay area.  Nobody should believe what the media and government authorities say, when they're so sure that there is not any kind of relation at all. To admit that magnetic fields and electric currents can divert the trajectories of fragments of asteroids near earth, proves that gravity cosmology is wrong.