Millions of buckyballs form stacked solid particles like oranges in crates, says Nye Evans, in the XX Ophiuchi binary star system, around a small hot star about 6,500 light years away.  Buckyballs likely form larger fractal hierarchical solid particle superstructures far larger than just the sizes of mountains. Buckyballs superconduct friction free cosmic scale electricity in galactic jets that are shaped  and confined by magnetic fields. The particles are minuscule, but each one contains stacks of millions of buckyballs, with the volume to fill 10,000 mount Everest mountains. With literally solid buckyball mount Everest sized structures detected around a star, one should wonder if both gaseous and solid buckyballs surround galaxies and are significantly responsible for producing galactic scale magnetic fields and superconducting electricity at the theoretically unstable hypothetical galactic black hole without phony dark matter gravity. We need to search our sun to determine if buckyballs are being produced or ejected without our knowledge. Buckyballs are likely vitally important electromagnetic components shaping and ruling the Universe, having a common abundant incredibly dynamic form that is produced by stellar factories. Only gaseous buckyballs were previously found in supernova winds, as single molecules that were not yet known to be highly organized into millions of larger solid particles. This EM Buckyball Cosmology was our feature story when the Spitzer telescope discovered buckyballs and graphenes in the magellanic clouds. The Electric Universe Thunderbolts has a great forum discussion about cosmic electric and magnetic fields operating through common buckyballs and graphenes.

If all the atoms in just one human body were individually aligned into a two dimensional straight line, it would stretch beyond our local group of galaxies. Carbon nanotubes are unique being two dimensional with only a single atom in thickness.  Fractal carbon atoms form 3D gaseous and solid particle buckyballs around stars, galaxies, superclusters, hyperclusters... with no ultimate cosmic size limit in outer space. Outer space conditions are ruled in the universe by ever larger scales of plasma, first defined by Hannes Alfven. The single carbon atom manifests itself with incredible phenomenal potentials by capturing light and converting it into electricity by superconduction. Scientists already know that a semiconductor can emit more light power energy than it consumes electrically. Buckyballs are everywhere and obviously responsible for causing the phony dark matter gravity confusion, where EM forces are intentionally being ignored by dark matter gravity pseudo-scientists making a living. Solid particle buckyballs with volumes filling 10,000 mountains around stars is not explainable by gravitational theory !  Only electromagnetic forces in plasma would form and shape huge solid carbon buckyball structures surrounding binary star systems. It becomes rather apparent, that billions of stars eject buckyballs that shape galaxies, causing galaxies to interact with other galaxies. Galaxies need only share one carbon atom at a time to be connected together by bipolar jets carrying electric currents and magnetic fields. Cosmology and the view of the Universe is already changing.  Common sense reasoning needs to be used by scientists everywhere, to reject mainstream dogmatic institutional big-bang gravity theories. 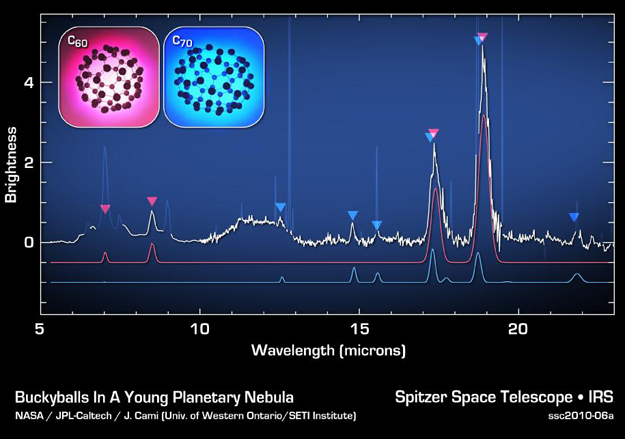