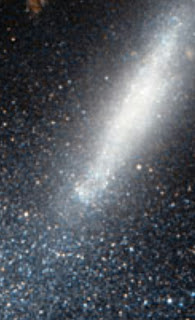 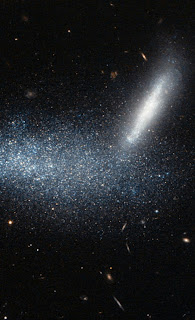 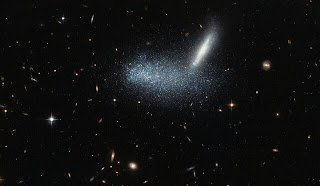 Both galaxies and stars form and are connected together like beads on filamentary plasma strings. Stars form inside characteristic width light year sized filaments. Intergalactic filaments span tens to hundreds of millions of light years across. The supercluster filament of the Sloan Great Wall spans 4.3 billion light years in distance. The thickness of filaments is extremely smaller than how vast and long they are. Only favorable alignments allow seeing through vast filaments, revealing large scale three dimensional fractal structures. Stars hop galaxies travelling inside filaments, as do ancient globular clusters and roque planets. Stars even trade free roaming roque planets. This is a fortunate 3D spacial oriented alignment for our perspective view from earth. Light emissions show information about the structure of galaxies.  IN NO WAY IS THIS A COSMIC ILLUSION.   Galaxies are made out of stars. We can clearly see that the two galaxies are not going to collide because the stars travel paths that are not collisional, but follow orbits along electromagnetic shaping vortex structures. 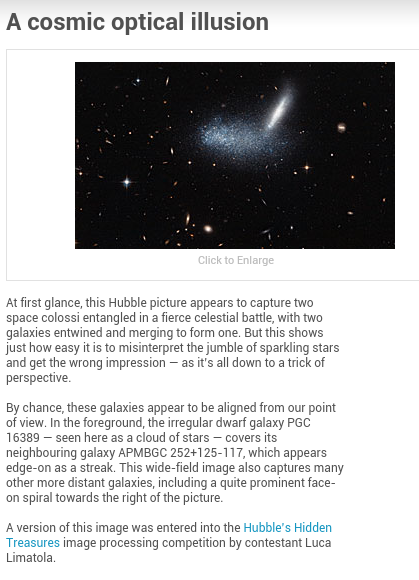 DARK MATTER BELIEVING SCIENTISTS CLAIM AN OPTICAL ILLUSION EXISTS TO CONTINUE PURPORTING DARK MATTER THEORIES, AND DARK MATTER FILAMENT COMPONENTS AS ATTACHMENTS, ALL TO DECEIVE THE PUBLIC and continue making billions at the expense of taxpayers.